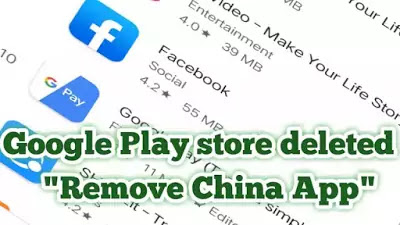 In the time of COVID-19 epidemic around the world, 50 lack people around the world are suffering from the huge loss of their lives and most of these countries are blaming China for these circumstances due to whose underestimation this outbreak lead into such conditions, China is now facing another problem in India that could be said as a boycott of Chinese goods, apps and software more likely ” boycott moment ” against China through an app known as Chinese App Remover which got under highlights more than it was in the two weeks, just because it’s now been removed from the Google Playstore without any certified reason.

Actually, the app was an Indian oriented app which was specially organized for the function: to scan and detect the Chinese apps and software installed into smartphones and then uninstall them from
the user’s devices making it Chinese apps free.
‘Remove China App‘gain its popularity soon as it came up and people gave it a better response with good reviews and high ratings i.e., the app was gaining its value and worth for its work and support to boycott Chinese apps and software and standing with the country.

Actually, it’s not the first time as google did such things without any justified reason .here’s another app which has been removed from the Google Playstore just like this Chinese App Remover i.e., ‘Mitron‘it was also an Indian origination, an alternative for TikTok but soon it was also been removed from the play store before it could get the eyes of people who might like it for its similar platform just like
Tiktok.

Why Chinese Apps are being uninstalled by the Indian users

Basically, the reason behind Indians such response towards Chinese products and software is just related to the recent disputes among China and India regarding Line of Actual Controle(LAC), border.since last few days China is increasing its military para forces around the border and also several strange violating acts are being done by the Chinese forces there for which the whole World is opposing China and this confliction led a new hot trending topic in India of uninstalling Chinese apps and the use of Indigenous goods and to realize our Prime Minister’s dream, of ” AATM NIRBHAR BHARAT “.
this 2020 really brought so much over the level that we never seen or thought of it to happen, and as our Prime Minister Narendra Modi said that this is the time for us to be our own self and stop relaying over outsiders, this will not make our own country a new face to the world with abilities and better outcomes but will also strengthen our own value and economy.

HOW TO DELETE CHINESE APPS

However, there’s another method to find Chinese apps and other relevant software on our smartphones and can delete it using google with just a few steps:-
search n google by typing
<AppName>origin country
like for example:-
<tiktok>origin country .