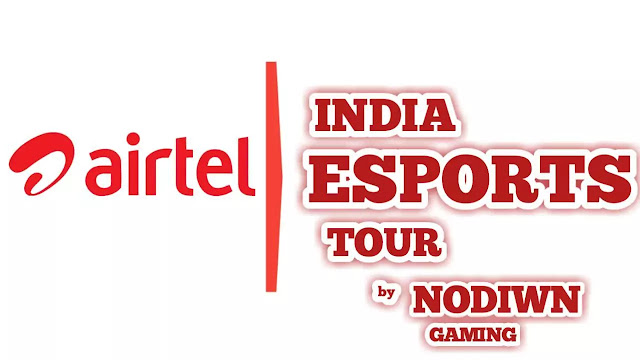 E-Sport has made a well-placed scenario in India and now making it a good opportunity to use and support telecom operator ‘Airtel’ had a partnership with popular  E-Sport brand Nodwin Gaming.

With an estimation, online gaming will be valued over $1 billion boundaries with the mover the 620 million gamers by 2021. In this estimation, both Airtel and Nodwin being the part of the push have announced the ‘Airtel India E-Sport Tour’.
It is said to be the fourth most motion of its kind in this segment with a national ranking and quaffing system for Indian players. Based on the player’s annual performance across tournaments to crat point table for participants.
According to Nodwin Gaming compiling those particular tournaments into a base chart will give rise to new gaming culture in competition Indian E-Sports. The player and team performance throughout the years rather than preparing for any standard tournaments in a year, said Akshat Rathee, founder and MD, Nodwin Gaming.
Initially, The Airtel India E-Sport Tournament will conduct all Nodwin tournaments across gaming title of:-

The Tour will be broadcast on Airtels Digital Platforms to enhance mover audiences. Once the annual tour ends, a final leaderboard with winners and award shows across the games will be organized.

Airtel has always been supporting Digital India and Gaming is the next frontier of entertainment and this partnership will give great potential and support to the youth in India, says  Adarsh Nair Chief Product officer of Bharti Airtel.

Q1. Is PUBG Mobile India Tour 2021  the biggest ever esports event in India?

Ans. Yes, there is a number of pros of PUBG Mobile to become the biggest ever E-Sport event in India. Because seeing recently the growth of PUBG Mobiles in Indian every one is estimating that it may change the feature of gaming in India.

Q2. Is Esports getting popular in India? How does the future of Esports in India look like?

Ans. After the launch of PUBGM, the growth of esports is tremendously growing in India. Esports is like IPL or like any other spots, it’s just a digital sport. Esports is not much popular in India right now, but till 2025 esports will be as popular as any other sport, and India will probably be the hub for gamers till 2030.