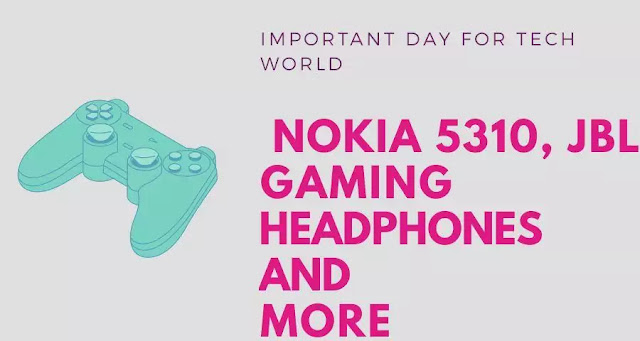 This date 16 June 2020 is a very important day for the Tech World and auspicious day also because Nokia, Sennheiser, JBL, and Motorola launched there new product in India. We also get information about new Newest-Smart branded Speakers.

But on this day Apple got some bad news that is the European Commission launched there two new Investigations and the passes of the day Adobe gives the news of new features in Creative Clouds.

Below is a list with a small summary of products that were launched on 16th June 2020.

The 2020 version of XpressMusic will hit Nokia’s sadness. Now Nokia 5310 launched with dual front-facing speakers with a dedicated music button and has expandable storage up to 32GB and Wireless FM Radio.

The new audio product lunched by Sennheiser is Momentum True Wireless in India. With the price of Rs.24,990. The newly launched earbuds come with 7hrs battery backup and support of voice Assistants and with an IPX4 rating and offer ANC.

JBL comes with its Quantum Gaming Headphones series in India. JBL Quantum series has 7 pairs of headphones which go up to 29,999, and its starting price is 3,999. The gaming headphones support PC, Mac, Xbox, PlayStation, Nintendo Switch, Mobile, and VR platforms.

Motorola also takes its step forward in India and launched Motorola One Fusion+. The new Motorola smartphone has a pop-up selfie camera, 6GB of RAM, and 128GB storage, a 6.5-inch full HD+ display,. It is powered by Qualcomm’s Snapdragon 730 processor. With the price of Rs.16,999.

Google is planning to lunch its new Nest-Branded smart Speakers soon. But no information coming out from Google except its codename- ‘Prince’.In the Google update its smart speaker upgrade with the Nest Mini and Nest smart display. It can be an upgrade over the Google Home smart speaker.

After complained by Spotify against the anti-competitive practices of Apple the European Commission launched there two new Investigations. In this investigation, Apple’s App Store fees, in-app purchases, and apple services also looked into.

Adobe comes with new stock and Lightroom discover sections and new audio stock integration  Auto Reframe and Pan and Zoom are coming to Premiere Rush and many more.